The Humdinger half marathon– Race Report

In 2013 I had run the old Humdinger which was 10 miles and it started and finishes at Hestercombe Gardens, back then there was also the 3 miles Hurtle which I ran in 2011. Now the headquarters has moved just down the road to Wellsprings Leisure Centre and the races are longer, the Humdinger is now a half and Hurtle is 5 miles.

I knew that this was a tough hilly race but did not realise how tough, unlike the Drogo where you have big hills followed by long down hills but here there was not that many long down hills, only 2.5. I just felt that we were just climbing and climbing and climbing. My legs were heavy, and I lacked energy and I just couldn’t keep up with a fellow club runner. The lack of energy in the legs were not helped by the freezing cold, shin deep huge puddle we had to wade through, it froze the feet and made the hill around the corner so much harder to climb.

I did run every hill apart from half of the Humdinger hill because I could walk faster than I could run it and I thought walking would help save some energy for the next half of the race. Even when we got to a slighter flatter section of the race, it wasn’t flat, and we were hit by cold strong winds which didn’t help the matter. I started and finished the race in sunshine but in between we had the cold strong winds and hail.

By 7/8 miles I was in hell, I was hating every step and thought it’s a long way to the finish, honestly if an alien had come down and tried to abduct me then I wouldn’t have put up much of a fight. What kept me going was that at around 10 miles in the next village I would see my Aunt and that would be a great boost. At 8 miles I also took a gel, perhaps I should have taken one sooner, it was either the gel or the fact that the route became less hilly that I started to enjoy myself a little. The hills were much smaller and there was a nice downhill section through tall hedges which gave me a good feeling. As this was my first half since December when my left leg just gave me such issues I was worried especially as this was such a hilly half. At 8ish miles I could feel my left leg and it started to drizzly and I thought oh no here we go again, but I gave myself a stern taking too and ignored my leg and focused on looking at the flowers in the hedges.

When we hit the 10-mile distance marker I thought wow those 2 miles had gone quickly, that gel certainly had worked, but I did think that we didn’t hit 10 miles until we had entered the village, but I could have mis read it. But no someone had swapped the 9 miles and 10-mile distance signs over as we hit the 9 milers sign closer to the village. The run in to the village is about a mile long decent which is a welcome change after all those hills, but some of it was a steep gradient which did irritate the knees slightly. I kept running down the hill as I was really looking forward to seeing my Aunt, as I came around the last corner I could see her, I decided the cross the road and give her a hug. This hug is what I needed to make me smile and to finish this race.

As you exit the village there is a drinks station and then the last 3 miles is flat to undulating and at this point it was keep the head down and the feet moving. I was determined not to be over taken for as long as possible even though there were a few runners just behind me. I have to say I felt strong in these last few miles and took the odd little mole hill in my stride and this was a positive to take from this race. I was thinking that we had another biggish hill to climb up (we ran down it at the start) but we came back to the start a different way. We pasted the start as the finish is down the road at the leisure centre, in these last 600m I over took 2 men and there was a woman in front who I thought I wouldn’t be able to catch. As we turned in to the leisure centre I could hear then see my fellow club runners who were cheering me on, I kicked in to a sprint and gave it all I had, and I pipped the woman to the line, I was so happy to beat her and just to finish. After such a hell of a run it was sad not to receive anything at the end, in previous years you were given a medal but this year you picked up a heart shaped biscuit in the sports hall.

After everyone had finished we sat down and enjoyed cake made by J and hot chocolate was provided by K. 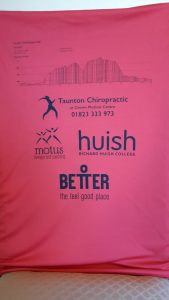 The route is extremely hilly, you spend the first 8 miles pretty much climbing with only a few downhills and even the little bit of flat are not flat. Before the 6 mile point you do wade through shin deep freezing water which just kills the feet and there is a photographer positioned there.  Before the ‘humdinger hill’ at around 6.5 miles there is water station and a nice downhill section.

At 8 miles the route gets a lot easier with a short downhill before a little climb and then you have about a mile long run down in to Kingston St Mary although this is a killer on the knees as in some places it is steep descent. As you exit the village there is a water station and then the last 3 miles to finish is flat to undulating, you run past where you started as you run in to the leisure centre to the finish.

This year you received the T shirt when you collected your number and a biscuit when you finished. The t shirt was last year’s t shirt as it was red again, but it has no date on it and last year you did get a medal. The finishers of the Hurtle only got given the biscuit, whereas previous years they did get a medal.

Apparently, there were some complaints on the day about the lack of medals and all runners were emailed in response to these complaints and to say they were going to be ordering some medals, so you could say if you wanted one.

On the email was a link to the company that did the timing where you could print of a certificate and watch a video of you finishing.

Great organisation, lots of people on the desks to pick up your race number plus there were plenty of marshals on the route so you never felt alone.

You were emailed race details and were told your race number. Social media wasn’t really used.

If you like hills then this is the race for you, it is reasonably priced, plus if a group of you are going then there is the 5 miles hurtle race to choose from. If the organisers were to give the humdinger runners a medal again this would help sell the race plus they do really need to give the finishers of the Hurtle a memento they can keep.  Plus 11 am is quite a late start for a half marathon but the plus side is that it does give you a lie in.