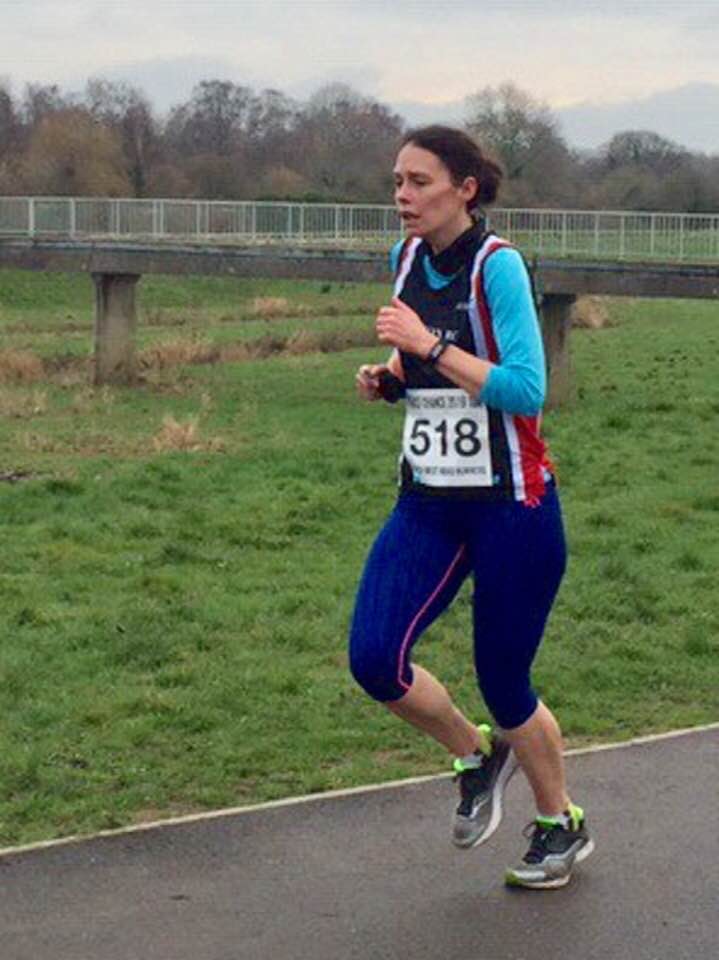 After deciding to be sensible and pull out of the Oh my Obelisk race the week before, the First Chance was now my first race of the year. I have not raced this one before as it is always booked up months in advance plus the years out with injury hasn’t helped. I must admit that I was not looking forward to this race because I have lost my speed and the thought of doing a flat 10 km was not an enjoyable one!!

It was a beautiful sunny but chilly morning when we arrived in Exeter, we collected our (Michael was racing too) numbers, bumped in to fellow club members, chilled out for a short time before we made the walk to the start. I had decided that I would try to settle in to a pace that felt good and see if I could maintain that pace for as long as possible and try to speed up near the end.

With 500+ runners the start is very narrow, so it does take a while to find space and to settle in to a pace which I eventually did. Surprisingly I settled in to a pace faster than I had thought I would, about 8.2 minute per mile and it felt ok and I just had to hold this pace for as long as I could. Off we went along the foot path, past the Double Locks pub and on to the swing bridge, where there is a very short climb to take you to the other side of the path that you have been following. There were a few puddles along here that everyone kept zig zagging to avoid but I decided to take the straight path and run through them, saving a little distance and energy.

The drinks station is positioned just before you do the loop past the pub and on to the swing bridge again, so you have it twice which is useful before the sprint to the finish. I had said to Michael at breakfast that if he can he must overtake me and do the best he can and not hold back in case I would be mad. He said’ I will not be anywhere near you, you are faster than me’. Well I was right as just before the drinks station on the first round Michael came running past me and he did say hello.

On the second loop I was starting to get hot in my long sleeve top and club vest, I should have been brave and just worn my vest as the sun was out. I was starting to struggle to keep my pace going and by 7 km I had to start to slow down slightly and the last 2 km I felt like I was going at a snail’s pace. I could see Michael in front which helped me to keep going and not stop for a breather, yet I did not have the energy to up my pace and try and catch him. Lots of runners passed me as they were doing their sprint finishes down the last km, the last km seemed to take forever to run but I could see the finish funnel up ahead and just focused on that. The members of the club that had already finished were there cheering me on and in the last 10 meters I managed a little sprint finish.

We picked up a bottle of water and some fruit and walked back to HQ and collected our memento-a nice boot bag and a chocolate bar. I was really pleased with my time considering how I was feeling about the race before hand and I was thinking around the 54-minute mark yet………. 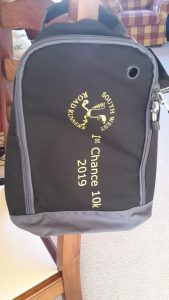 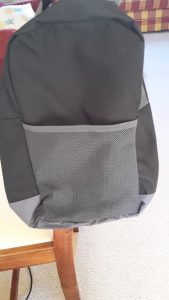 You were given water, fruit and chocolate at the end and were rewarded with a boot bag, not a thin string bag but a boot bag made from a strong rucksack material which will be hard wearing. There is a small pocket on the back and a reinforced handle.

The organisation on the day was great, plenty of marshals and it was quick to collect your number. The only slight criticism is that the building that HQ was in was quite small for the number of runners that were there. You had to climb a few floors to get your number and there were lots of runners on the stairs with their bags going both directions, so it was congested, then it was back downstairs to the bag drop.

Social media was used to announce the results and give any details prior to the event, you were also emailed race day information.

Yes, I would as you have a great chance of getting a PB, although because it is in January the weather can vary massively and the openness of the route means that you could have to battle a strong head wind. I do not like two lap routes but because this is not two full loops it is bearable and with it being flat this also helps. You do have to enter this race asap when the entries are released as sells out each year, entries tend to open late summer.