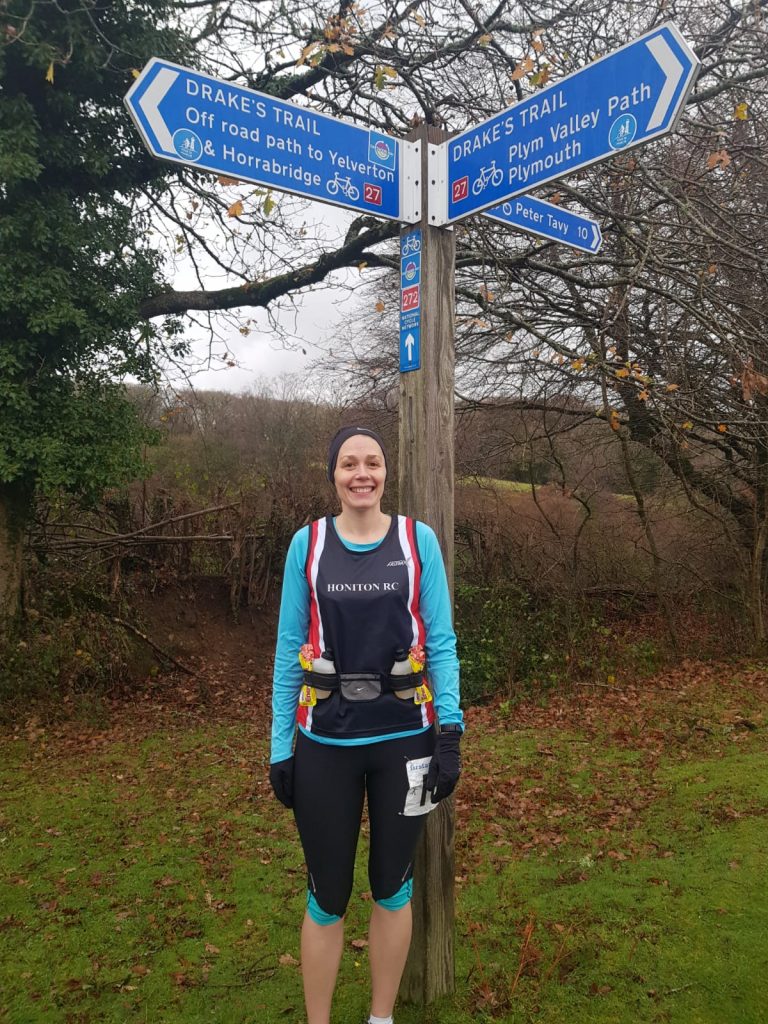 I wanted to end the year by doing a half marathon, even if I treated as a training run rather than racing it so I managed to get a last-minute place for this half just outside Plymouth. Plym trail half is organised by first and last running and they put on half and full marathons on this cycle path four times a year. I had also managed to secure a place for Mike too, but he was suffering with a cold, so he came with me but didn’t run.

The race was starting at 0930 which meant it was an early start that morning and I was nervous because I had only run on the Friday and nothing for nearly two weeks before that as I had suffered from a cough virus thing. So, I tried to remind myself that I had only planned to run this half as a training run rather than to race it. We arrived in Clearbrook village which is on the edge of Dartmoor and is a tiny village with a village hall and a pub, my Dad knew this village well when he was stationed as a Royal Marine in Plymouth. Off to the village hall we went to collect my race number and to decide what to wear. It is a very small race which I hadn’t realised, and I was surround by runners wearing the 100-marathon club hoody and I heard one man say that this will be his 300 something marathon.

My biggest decision was whether to wear road or off-road trainers, the website said the trail drains well so either is fine. I was also thinking well if it rains then I will have to try and dry my trainers before the Christmas Lights club run the next evening (I did not do the club run as my legs were shattered).  I thought that the trail would be like the canal path, but I found out that it was like the cycle path from Topsham to Exmouth, so I was pleased that I wore my road trainers in the end even though they did get wet!!

Just before the start I saw a fellow club runner Stephen who told me about this run and he was doing the marathon as usual. The route starts at the village hall and we head up the hill out of the village, around a cone and head back down the hill before turning on to the cycle path. The cycle path was so quiet with just us runners using it until we got closer to the turnaround point at Coypool. The route is beautiful, it runs through the valley, with stunning woodland on both sides, you could see a river below and you do run over a couple of bridges. Going through the tunnel was brilliant as it was only lit slightly so you couldn’t really see, and I kept having big water droplets land on me.

Even though it was downhill on the way out I was aware of not pushing the pace too much, I just wanted to enjoy it, use it as a training run and I knew coming back up would be a challenge. If you were racing it then you would push it going down, which would give you a good time buffer for the return journey. Pretty much from two miles in I was running by myself, I could see few runners up in front, but I was by myself, I do not mind this and I do have the self-motivation to keep running. It would be lovely to do this run with a running buddy as you could race it together or just relax and chat along the way.

For a mile towards the turnaround point the runners in front were coming back towards me and I was thinking I just want to get to this point and head home and it was getting busier with the public. At the turn point there was a drinks station and your number are ticked, then I a runner told me that we need to get back to the railway crossing before the barriers are put down and we would have to wait. So, I had to pick up my pace for a good mile and a half and yes, we missed the train crossing, after that I settled back in to my pace. Everything was going fine and I possibly on for a seasons PB when at 9 miles my left leg decided it had had enough. It wasn’t just heavy, but the ache went from hip to knee to ankle to wherever and at one point I thought my knee was going to give way. I kept going until maybe just over 10 miles when I had to stop and walk for a bit until my leg felt OK, then I would run for as long as possible before the ache would cause me to walk again. The last two miles were hell, my mental strength was taking a battering too, but I knew if I got to the tunnel I was nearly at the finish and then it rained. At that point I cried and just wanted to finish, I could see a runner ahead and I so wished that I could run properly and catch up with her but in the last mile she disappeared, and it was a case of putting one foot in front of the other.

I recognised the corner that was the start of the cycle path and I was so happy to see Mike and hear my time as I crossed the finish line, after all that I had got under the two-hour mark. I was wet through, starting to get cold and my leg was just achy, no major pain but it wasn’t moving like my right. Chatted so a runner that Mike knows and who we saw at Drogo (who I beat), got change and headed home with a stop at Costa for a hot chocolate.

I completed it in 1.58.25 minutes, 22nd out of 41, there were some serious fast runners in front of me. I would like to run it again and hope my leg stays normal!!!

Plym trail half marathon and full is put on by First and Last Running and they have 4 weekends a year where you can do a double, so a half or full on the Saturday and you repeat this on the Sunday. This attracts a lot of marathon runners who are reaching 100 marathons or have surpassed that number. I would like to try and do a double, it would be a mental challenge as you would have to make sure that you didn’t push it too much on the Saturday and on the Sunday to think I have run this 24 hours before, the same views, be tough. 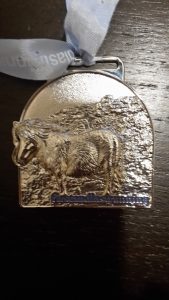 The route is a short up and down through the village then a 12.31 mile out and back along the old railway line, starting in Clearbrook village with the turnaround point at Coypool. On the way out, you lose around 100 m in elevation then gain it on the way back.

As this was an extra race they were using up left over medals from the last few years, I picked a shiny medal with a Dartmoor pony on the front. This year they had medals that completed a set, so you could have picked one to go with your set.

Great organisation on the day, it is small so there isn’t much to do but there was tea and coffee facilities in the hall. If you were doing the marathon you could leave your named drinks bottle on the table.

They do not really use social media, just their website.

Yes, I would as it is cheap to enter plus the route is beautiful and quiet, although with it being a very small race you do spend a lot of the time running by yourself. I am happy to do this, yet if you are not then best to run with a friend. The medal was great too and you also got a small goody bag with food and water in.