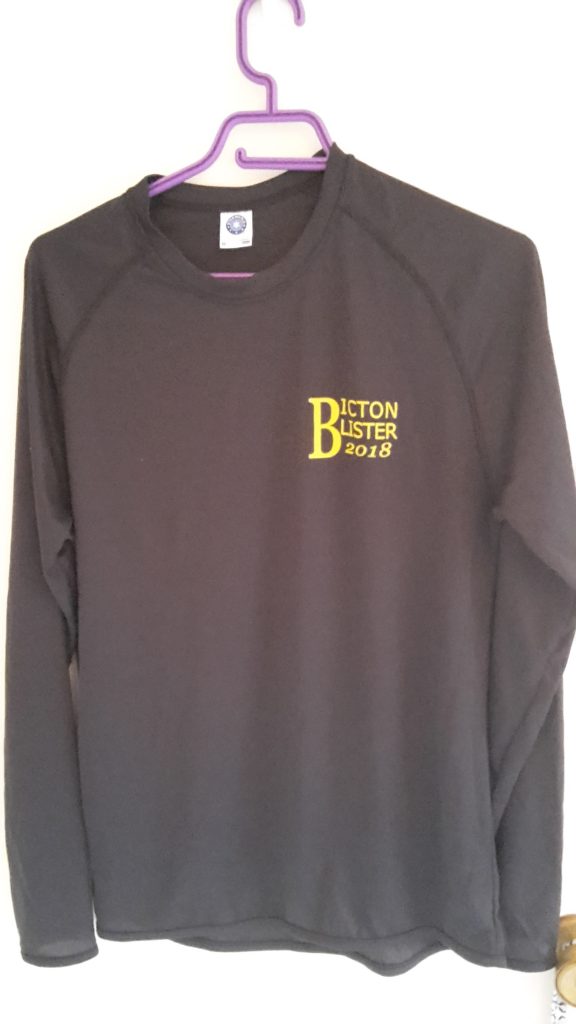 The Bicton Blister a 10-mile trail run organised by Exmouth Harriers and is a run that I have never done before, in the past I was always working so I was determined to do it this year. I knew it would be hard going doing the Drogo and Blister back to back and it was.

We arrived nice and early as I know that parking is limited at the college, I collected my number and waited for members of the club to turn up. Again, it was a glorious autumn morning with beautiful sunshine. Just slightly colder and we would not be as sheltered as the week before.

Standing on the start line I knew that my legs were tired even though I had tried to rest as much as possible during the last 7 days and I knew it might become a mental battle. I tried to put these thoughts of tired legs out of my head and focus on the fun ahead. The gun sounded and off we went down the drive through the grounds of the College before turning on to the road.

The first 2 and a half miles on road led us on to the Common, these miles were mostly a steady climb which I do not think I paid attention too and so I didn’t adjust my pace accordingly. Which meant by the time we had arrived on Woodbury Common and around 3 miles I was done, I was struggling, and my legs were just so tired. When the split came in to view for the Blister Lite, the shorter race, I was extremely tempted to take the split, my legs were keen, but my mind wasn’t, so I continued and just tried to adjust my pace.

I definitely enjoyed the 2nd half more than the first, I preferred the route more and I had settled in to a pace I was comfortable with. At the halfway point there was a water station which wasn’t located at the best place as you had a drink then entered a narrow path where people were walking so I did accidentally bump in to someone. The path led us down to a beautiful wooded section that I really enjoyed, you did have to watch your footing though. This long enjoyable section brought us back out on to the Common and the head down slog to the finish before we left the Common for the road section there was a short but very steep hill which was the only hill I walked up.

Once we hit the road section it was only a few miles back to the College and to the finish line, the first part was good as it was downhill but as soon as the downhill turned in to flatness it was a struggle to keep my pace up and it seemed to take ages to get to the corner and on to the College drive way.

A short hill climb up the driveway and the finish line was in sight, I managed to hold off the runners behind me which I was pleased about.

I crossed the line in 91 minutes and 23 seconds, 188th out of 423 runners. Really happy with my time and I barely looked at my watch, yet I should have looked at my watch as I meant have pushed to get the 90 minute mark.

I collected my t shirt and I was in need or sugar even though I had a gel on the way around, looking back I should have taken two gels with me.

I also got a small trophy as I was part of the Women’s vet team who came 3rd, which was really exciting. 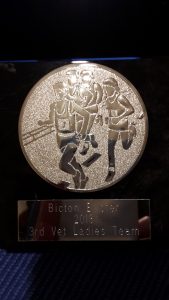 The 10-mile trail route is a circular route across Woodbury Common and it is run on hard and soft trails. The first 2 miles and the last 2 miles are the same, with the first time you climb up to the Common which means you run down this hill on the way to the finish. Although there is one little short hill to hit the finish line.

The memento is always good and this year it was a long sleeved black technical t shirt, although the sizing was unisex so even the small is quite big.

Great on the day organisation, no ques to collect race number and plenty of marshals on route due the cadets helping.

On social media they kept informing us how many entries were left which meant you didn’t miss out on entering, the results were also posted.

Yes, I would as it a great run, undulating with only small short climbs, pretty cheap to enter plus you get a great memento. There is also the Bicton Blister Lite which is a 5 mile race.