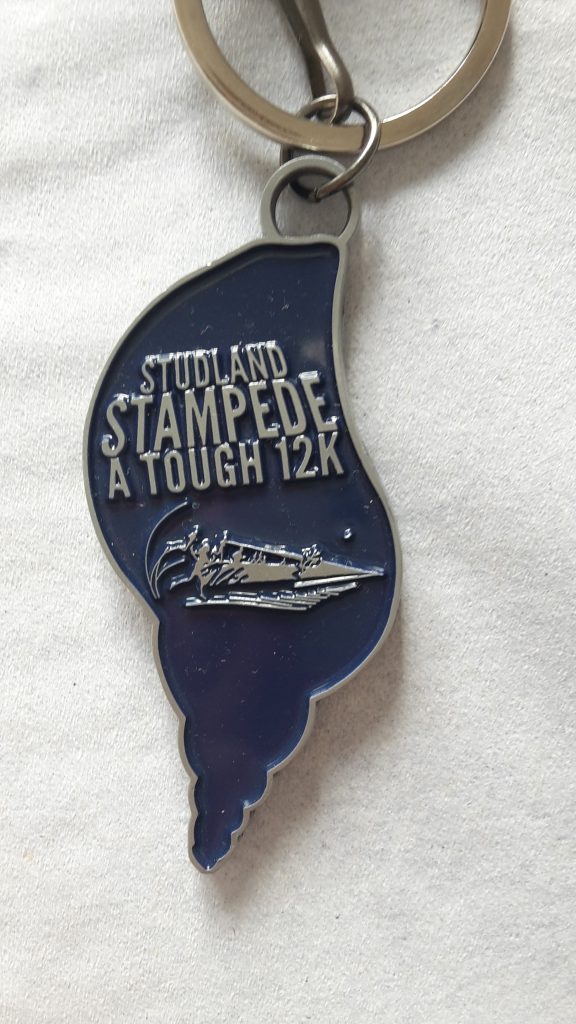 The Studland Stampede has always been a popular run with some members of the running club, with some running it every year. The race was sold out within a few hours when entries opened on New Year’s Eve last year, I don’t know why I didn’t enter it. However, at the beginning of the month I managed to get a place form a fellow club member who had double booked himself.

At the start of the week the weather for race day was looking sunny and warm for the time of year, as it has been for previous years for this race but this all changed. We drove in heavy rain, parked in heavy rain, collected our numbers in heavy rain plus it was cold and windy. We then sat in the car until it was time to head to the start and get a club photograph, by which time the rain had stopped, the wind had died down and it was looking to be great race conditions.

I joined the first wave of runners as I was told by a runner who had run before that this would be fine and we set off running along the beach before exiting the beach via a narrow path. The next mile or so was a gentle climb to get up to the heath land with open views of the surrounding countryside. By 3 km I was tired and with 9 km to go it seemed like I had a challenge ahead, I eased off the pace slightly and tried to relax but every slight incline seemed like a mountain. The one good thing was that a good number of the paths were firm even though there were puddles which made it easier for my tired legs. If the ground had been soft and muddy than this would have been more energy sapping.

By 5 km I was starting to feel better and I was enjoying the race more, the undulating’s didn’t seem so big anymore and I was taking in the views. It was till dry but at some points the wind did pick up slightly when we were more exposed. From 5 km onward I stared to pick up the pace slightly and I was happy and feeling OK, then we hit 8 km. At this point we entered the sand dunes, a flat sandy path with the sand being so soft. It was a flat section but running through the soft sand was energy sapping as you had to lift your legs up so high, the only way through was to drop the pace and do smaller steps. I had no idea how long this ‘fun’ would continue but thankfully it was only short as at 9 km we appeared on to the beach with the sea in front of us.

This sand was firmer underfoot which was easier to run on, but after those sand dunes anything would have been better. Perhaps this last 3 km beach run would feel much harder if we didn’t have the sand dunes beforehand. It was beautiful to run alongside the sea, there was no wind and it was so peaceful. I made the mistake to look ahead as you could just make out the tent at the finish and it seemed miles away and with every step it did not get closer. I just had to keep my feet moving, stick to my pace and enjoy the stunning scenery around me. I was over taken by a few runners and looking back I perhaps could have picked up my pace a little, but somehow because I could see the finish it was hard too.

Eventually the tent began to look bigger, only when I was say a couple of hundred meters from it, so I dug deep, told my heavy legs to move and I sprinted away. I was cheered on by the male Honiton runners who had already finished, I was handed my goody bag and a nice man took my timing chip from my shoe. 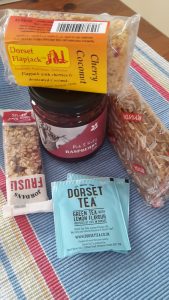 The 12 km circular route starts and finishes on the beach at Studland bay and takes in trail paths across heath land in between. There is a staggered start with 3 groups to avoid the narrow section at the end of the beach from getting too congested. After this you are climbing for about a mile to take you up on to the heath land where underfoot there were good firm paths to run on interspersed with softer muddy tracks and several puddles. The route was undulating with short sharp climbs but the views from the heath land looking over to Poole harbour were glorious.

A seashell shaped medal that can be also used as a key ring and a goody bag containing a jar of National trust jam or preserve, flapjack and tea bags. There were many great spot prizes too such as beach clothing, free lunch or a stay in a local hotel. You can buy race photographs.

On the day you collected your race number and timing chip from the tent, yet I didn’t see a route map in the tent, and at the start of the race the race director gave key information. There were a few marshals on the course, mostly at the road crossing or any junction.

Social media was used to promote the spot prizes, give a preview of the medal and to let us know any key information.

Yes, I would as it was a great race with fantastic views and it wasn’t too challenging. It is a different distance to run with it being 12 km not 10 km and the terrain was firm even after the heavy rain, plus it is nice to run in a different area. The entry is quite expensive and apparently the medal wasn’t as good as previous years. It is quite a way to travel, 1 hour 45 minutes from Honiton, but on a sunny day we probably would have stayed and chilled on the beach, as it has been glorious hot weather before.

£22 entry plus £4 for parking, in your goody bag you get a discount code for next year’s race.