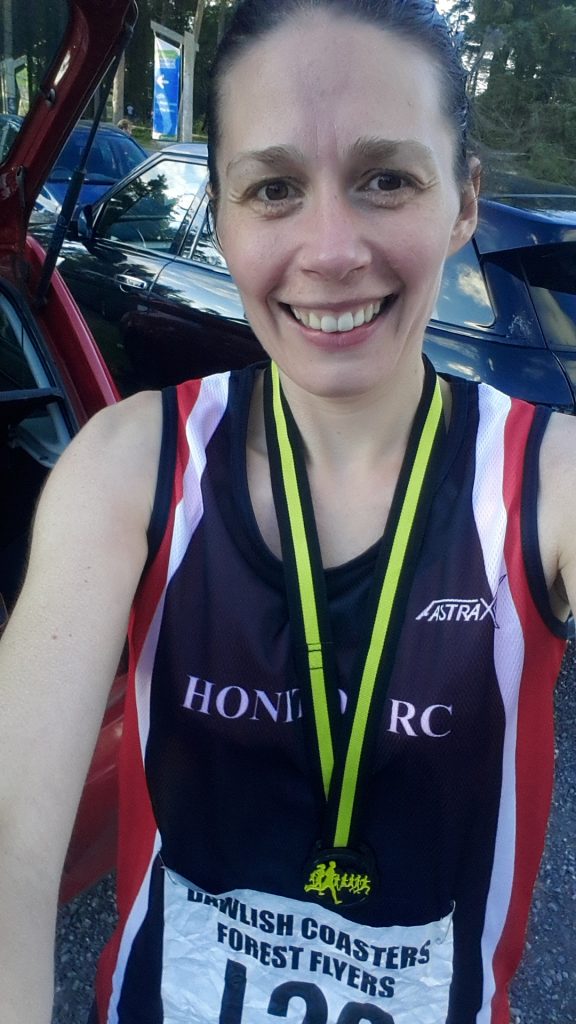 The Forest Flyer is a 5 mile off road run organised by Dawlish Coasters and takes place on a Friday evening at Haldon Forest and I had never done it before. It was a last minute decision to run it as I had been debating between this and the Jurassic coast run at Bridport on the Sunday for a couple of weeks. Bridport was more expensive but the medal looked good, however it could be really hot running at 11 am (although it rained), whereas Forest Flyer was cheaper, local but I didn’t know if I had the energy to race on a Friday evening.

It wasn’t until Friday morning that I decided that I would run it, I put a message out on my club’s Facebook page seeing if anyone else was running and if they needed a lift. As usual we turned up an hour before kick off, which we didn’t need to as there was lots of parking and registering took minutes, however we saw other members of the club and it was nice to chill out and chat. I had never been to this part of Haldon Forest in all the years of living in East Devon so I was looking forward to running somewhere new and it had turned in to a beautiful summers evening.

At 7 pm we set off running through the forest and it was tough going as the paths were narrow so you had to time your overtaking. I didn’t know how much energy I had in my legs after a busy week and teaching aqua fit that morning so I took it relatively easy to begin with, pretty quickly I had to increase my pace in order to try and get clear of a fellow club runner who was on my heels. Running through the forest on a beautiful summers evening was pretty magical and at times you had a beautiful vista over towards Exeter, plus what helped it the pretty flat, little undulating route, well until about 2.5 miles.

I knew what was coming as someone I work with gave me a detailed Strava insight in to the route, this is one of his favourite races so he knew the route very well. He said there is a short sharp hill at around the 2.5 mile mark and he was right, I did manage to run this hill and i over took a couple of runners that were walking but as soon as the route flattened out they had the energy to over take me, this was annoying but I had them in my sights so I had to use this as an incentive to keep my speed up. Because I knew what the route was like, that there were really only two hills to mention so I knew I had to run fast on the flat sections and push the pace on the downhill to make up for the mile long hill at the finish.

Running the downhill was fun as it was windy and you could let yourself go, there was only run small path that was a bit bumpy underfoot and you could have easily twisted an ankle. At the end of this path we turned to the left and you were at the bottom of the long hill that leads to the finish. I was determined to try and run as much as I could of this hill and I did, I just kept a nice slow pace, kept my head up put one foot in front of the other. I do remember that I wanted to run to the marshal I could see on a bend and he was one of my goals, with the other being a fellow member of my club who I could see in the distance. There was a lady in front of me with her name on her vest, who I quickly over took and there was another lady running just in front of me but when I started a short walk she wasn’t putting any clear distance between us which meant walking would not hinder my place. Once I had gained a little more energy in the legs and air in my lungs I started to run again and I promptly over took her.

Coming up to the last bend I was close to my fellow club runner who at this point was walking, I said a quick hello before overtaking him. I tend had to make a decision as I knew in a sprint finish he would win, so i decided to walk a little in the hope of holding him off in a sprint. I maybe should have continued a slow plod as that might have put some ground between us and doubt in his mind. As the hill flattened off and you could see the finish I kicked in before he did and tried to pick the pace up as much as I had the energy for but he over took me. I was a little annoyed as he walked most of the hill but he beat me, in hindsight I don’t think I would have walked more of that hill as I am glad I ran as much of it as I could and It might not have changed the outcome.

The race is on the foot paths of Haldon Forest, most of the race is on proper paths so you could have worn road shoes this year as it was so dry, yet even so there is only a couple of segments that could be a bit muddy if we had had a typical British summer. 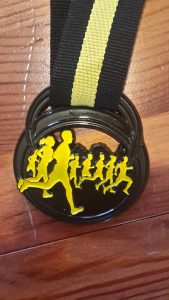 The circular route that runs through Haldon Forest in Exeter is really nice, with the first few miles being pretty flat with only the odd mole hill to climb. At around 2.5 miles there is a very short but very steep climb coming of a bend but after this the long downhill section begins. Just before the 4 mile mark the mile long up hill begins, I would say that you could run most of this hill but at times you did need a quick walk to try and get some energy back in the legs. At the top of the hill there is a very short flat section say 30 meters to the finish.

You get a nice medal at the finish and a bottle of water, there were also plenty of toilets and you also get a parking permit for the car park.

Great organisation form Dawlish Costers which is the running club hosting this event, you could enter on the day which was simple and there were a lot of marshals on the course.

Yes I would as it makes a nice change to run a 5 miler instead of a 10km and to race in an evening too. It is a beautiful route, with views over towards Exeter at one point, a pretty easy route as well, plus it it pretty cheap to enter too. If you are there with children or families then they can go for a walk on one of the many paths to choose from whilst you run. There is a cafe and an ice cream kiosk there which was closed as the race didn’t start until 7 pm but there missed out on a lot of trade.

Affiliated £8 Non-affiliated £10 plus £2 extra on the day yet this didn’t happen.