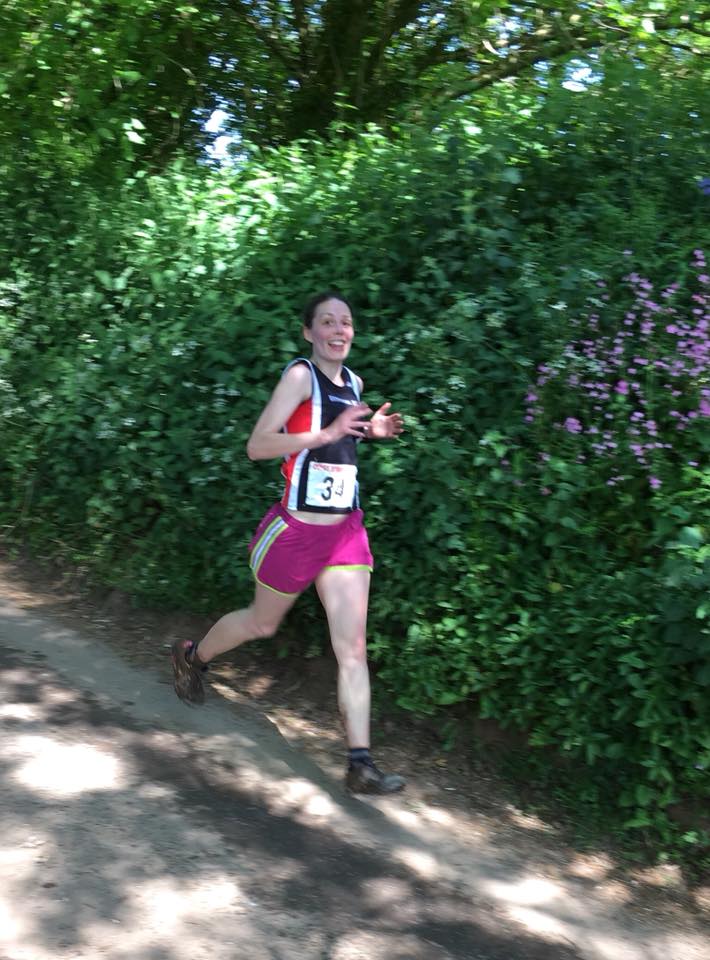 It was another glorious warm day for a hilly run in the countryside, this race is organised by the primary school to raise funds for the school. For some reason I was really nervous about this race but I do not know why, maybe it was because my Mum was there to watch or possibly because at some point I will have a race where it all goes wrong.

You collected your number on the day and plus the beautiful weather meant that a large number of people entered on the day. I would say that half the entries were made up by local runners from the village and parents of children that go or went to the school, this was nice to see.

After chatting to fellow runners from the club, it was time to head to the start, the start is not at the village hall but 20 meters up the road to the junction and by which time my nerves had grown. The start is a shock to the legs as it is up hill and ahead of you is a long steady climb which is windy so you can not see the top. Once at the top you turn left and you hope its downhill but no, you continue to climb, really you climb for the first 3 km with the odd flattish segment at points.

Eventually you are at the top and you know and hope that there is a downhill section and there was, a nice long stretch that you could pick up some speed.  At the bottom I did realise that we were the wrong side of the hill so we would have a long climb to tackle towards the end of the race. I knew this as I had looked at the elevation profile in the hall but I guessed I had put it out of my mind. At the bottom of the hill we are back on a main road which is undulating and I was desperate to get to the 5 km marker as I was tired. Along this segment a battle was started between myself and another lady who had over taken me on the down hill and she was strong on hills. Around the 5 km sign I did over take her but it was too early to put in a sprint to put some distance between us.

The Scouts and a drinks station greeted us as we turned the corner in to the wood and the start of a long gentle climb through the wood, with a bog at the beginning which I didn’t see so I got my right foot stuck. Whilst trying to free my foot and get to the side of the track I caught my calf on a bramble which was a bit sore. The lady I was battling over took me at this point but soon stopped to walk and I felt I could run, well at a snails pace for a little longer so I over took her pretty quickly. The pressure was on to keep in front of her, so I tried to jog all the parts I could and walked when it felt that this was the quickest option. This path through the wood was tough as it felt really long (probably just under 2 km), it was a steady incline with the odd flatter segment which didn’t give enough time for you to get in to a rhythm. Eventually you get to the top of the hill and you cross over in to another part of the wood.

During this circle in the wood, I tripped over nothing and did an excellent roll and got straight up with no injury. The lady with whom I was still jostling with asked if I was ok, I said yes and then had to get going before she over took me. Through the bogs we went and I tried to pick up the pace to stay in front of the lady and it was relatively flat but at times if was difficult to see the tape ahead that marked the route.  After a slight climb we came out at the place where we entered the wood and had a nice flat trail that brought us out of the wood and on to the road. You could see the road ahead, nice downhill but a hill in the distance, I looked at my watch and started to panic as I wanted to get under the hour and I had just over 10 minutes to get a mile and a half to the finish. I was determined to do this and stay in front of the lady so I picked up the pace as much as I could and at speed I shot off down the hill. I hoped that the hill would be short and also the last and it was, I slowed the pace and got to the top and off I sprinted again to try and catch the man in front. All the way down the hill I kept pushing even though my legs were tired and it would have been easy to have relaxed and cruised down the hill.

The down hill seemed to go on for ages but I passed the sign for the car park so I knew I was so close to the finish. I turned in to the village hall and to the finish with my name being read out, I had done it, beaten the lady, didn’t beat the man but I had finished under the hour. 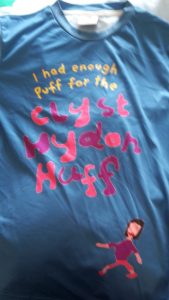 The route is three quarters on road and a quarter off road with the off road section through two woods.  The first 3 km is practically all up hill with the odd short down hill section in between the climbs with a nice long downhill after this. The road section between 4 and 5 km is undulating before you turn in to the wood just after the 5 km marker. It is a long tough climb through the woods as at times the incline is so small you don’t see it but you feel it, even after all the dry weather there was a few boggy patches. At the top of the hill you cross over in to another wood and do a circular loop here which also includes a few bogs plus a steady climb to the top where you entered. After this you run along side the hedge which is lovely and flat and you come out on to the road, it is downhill all the way to the finish with just a short sharp climb a quarter of the way along. You run past the car park and turn the corner from where you started, take the next left in to the village hall and in to the finish.

You get a great technical t shirt which has be designed by the children, the runners in the fun run get a medal and you can opt to buy a cotton t shirt, then there were plenty of yummy cakes in the village hall.

It was extremely well organized on the day, plenty of signs and marshals directing you to the car park. The race director gave short but excellent key points of the route, all the marshals were friendly out on the course. At the end your race t shirt was still in its packet with your race number stuck to the front and this was handed to you.

In the few weeks leading up to the race they posted picture of the route, any other information plus the results were on line by mid afternoon.

Yes I would recommend it as was a great price to enter, just £8 which included your t shirt, it is a great challenging route with finish. Although it would be much tougher if it had rained during the week as the bogs would be deeper and the trail through the wood would be hard running. As well as the 10 km there is a 2 km fun run which is one loop around a field.