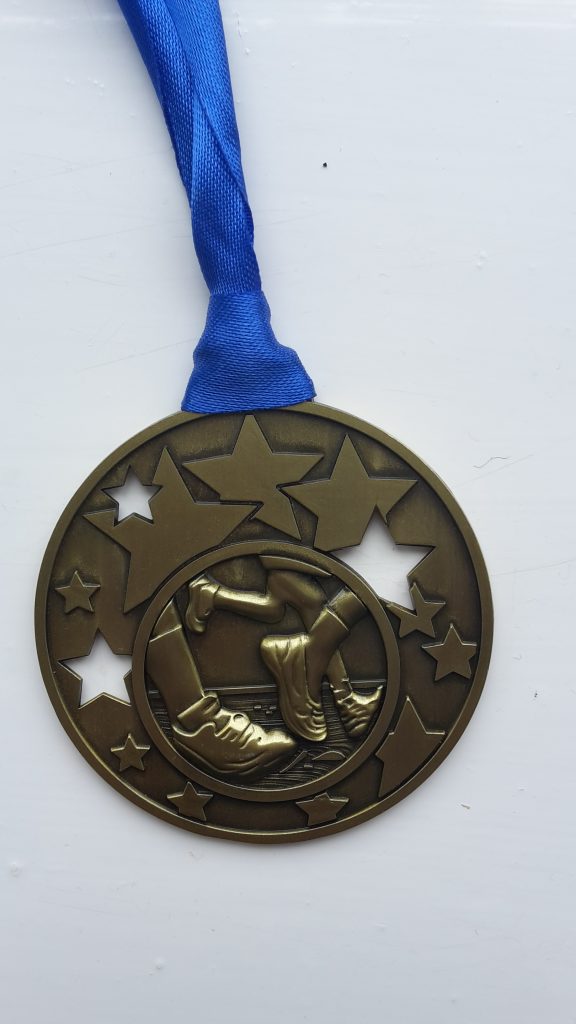 Sunday was the time for the Combe St Nicolas 10 km, a challenging road 10 km in Somerset which had been postponed from the 4th March because of the snow. Due to the postponement the new date clashed with my club’s own race The Honiton Hippo, I could have opted for a refund but this race had been one I had always fancied doing. The 10 km along with the 5 km and 2 km races are put on by the Primary School to raise money and he School is the HQ for the races.

Six weeks ago there was snow and today there was non stop rain, at times heavy and with some wind thrown in as well. Even though we all knew we would be getting soaked on the run, we all were tentative to take that first step to leave the school and walk to the start. It is weird how when it is raining it is hard to get outside but one you are wet you just accept it and get one with the run. The start was delayed slightly as there were still some 5 km runners coming in to the finish, this could be avoided by the 5 km race starting the same time as the 10 km or starting shortly after.

I was nervous as apart from running The Kilmington Kanter which was really off road, I haven’t raced a hilly road race since coming back from injury, so I was unsure of my race strategy. Do I just stick to a good pace, slightly easier but a pace i can maintain on the flat and give me energy for the hills? Or do I go at a faster pace, tackle the hills when they come and pick up the speed on the flat and downhill segments? Well I started off with doing the first option and taking it relatively easily, but then i slowly moved in to working at option number 2 when i found that I was pushing the pace on the flatter segments of the race. Yes this probably made the hills seem slightly harder but I just had to put my mind to it and get myself up the hills.

From about the 4 km mark there was a small group of us who were all running at a similar pace, we didn’t speak to each other as we didn’t have the energy too but it was nice to have people around you to keep you going. In the school before the race I had been chatting to a girl ( she said she liked my leggings) and she said she wanted sub 55 minutes, she was my goal. For most of the race she was way out in front of me, on the straight segments I could see her yellow jacket and I wanted to catch her and beat her. Mean, I know but sometimes you need to have a goal to keep you going, to keep you pushing, you have nothing against that person. I just had to keep running my own race, maybe she will slow down or I will push towards the end and I will beat her.

I started to close in around the 7 km mark but it wasn’t until the last km that we were running side by side. I knew it was going to a battle, we had an up hill finish and I didn’t know what she was going to be like in a sprint finish. I was still surrounded by our little group so I also had a lady and man from Yeovil running club to try and beat. We were all neck and neck going up the final road hill, the girl even over took me slightly and going in to the field gate way it was still close. When I am trying to stay in front of people I try and not look back too much as this can slow you down.

They was a tiny muddy gateway in to the second and final field and even then the girl was on my shoulder and it wasn’t until we were going around the final bend that I had a look on my shoulder and saw that I was clear. I was going to beat the girl in yellow and both the Yeovil runners and there was a few brave drenched souls cheering us in.

The route is challenging and hilly and that is saying something coming from Honiton but this course made Honiton seem flat unless I am just not used to racing hilly routes yet. There are many small sharp hills with a long winding climb between 5.5 and 6.5 km which is followed by a long downhill section. There are flatter segments in between the hills and of course downhills after the up hills. The last 2 km is basically uphill with a slight downhill through the village before a short steep climb to the turning to the fields which you climb through before a little downhill slope to the finish.

You get a basic but nice medal, this goes for the 2 km and 5 km races. In the school there is tea, coffee, cakes and bacon baps.

Great organisation, you entered online or via the post and collected your number on race day which was easy. Everyone was gathered together before the short walk to the start.

Great social media presence, especially during the uncertain days during the snow, there were regular updates, all questions answered when people posted and then it was postponed. The same points on social media where also sent to you via email. They posted relevant information such as directions, parking and any route issues (pot holes) in the few days leading up to the race. Then by the evening of race day they had posted and emailed the results.

Yes I would recommend it as it is relatively cheap to enter, either £10 or £12 and you get a medal, it is a good challenging race to test yourself on. There is a 5 km race which caters for new runners or runners coming back from injury or runners who love 5 km’s. There is also a 2 km run run for anyone under the age of 16, there are many age categories within this and for Coombe children and non Coombe children. The 2 km fun run starts at 10 am which means you could run this with your child and still be able to run the 5 km (10.30 am start) or the 10 Km (11 am start).